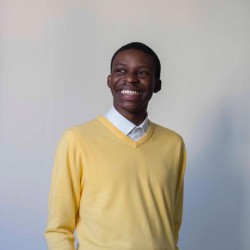 Kambani Ramano
Storyteller at kR story studio
Of Nsenga and Venda descent, Kambani Ramano is a storyteller in pursuit of light. He writes. He photographs. He attempts to think meaningful thoughts. And he dreams of one day being a real boy—I mean, a real artist when he grows up.

At the centre of a retail eco system germinating local business in a high-tech environment, Paul Simon isn’t afraid to think big. He lives for the challenge.  Paul Simon has something that’s...

Strength & Perseverance: A message to a young Thabo Makhetha

I recently had the pleasure of chatting to one of the most real and authentic fashion designers I have come across, Thabo Makhetha. To be honest, I thought I had an idea about where our conversation...

“I used to wear my dolls clothes, I’d try to squeeze into my dolls clothes with my Mom’s clothes, everyone’s clothes. Anything that could be wrapped or draped or tied; we have a family friend who used to sew and she used to give us all her little bits of things she’d sewn together to play in. All that creativity; I only have sisters so also a bunch of girls dressing up. I loved barbie clothes. I loved looking at clothes.

‘So what’s your story?’ I ask Eli in the broadest sense possible, deliberately leaving the question as open as I can. My hope is to present him with an empty canvas, so to speak; a blank piece of fabric on which to trace the lines of his narrative as he pleases. He is an artist, after all. And his forte – the pulse that animates his work, in fact – is to tell African stories with brave colours and prints.

‘The brand is Masa Mara—I hope you knew that?’ he laughs in response. It is a valid quip. We have barely just met. Our introduction happened less than twenty-four hours ago via a messaging app. Now he finds me in his studio attempting to record an account of his life, not to mention the philosophy behind his designs. He cannot be sure I even know his full name, let alone the one he chose for the athleisure line he founded in 2014. Come to think of it, I am not too sure myself that I know his name. Is it Eli Gold? Or do his closer circles call him Amza Niyonzima? More so: to him, what does it mean to be known? And how has this impacted his sense of place in the world?

If journalism were my strong suit, I would ask these questions outright in the course of our interview. Predictably, it is not. So I do not. Matter-of-fact reportage is not my gift. Biographical portraiture is more my style, whatever that means. And, as things currently stand, all I know is that all we are is two strangers in a room, storytellers – in our own respective crafts – engaged in the labour of capturing the beauty that lives in the continent’s soil and soul.

The idea of being a stranger – an outsider, a foreign one – is not new, specially not to Eli. Such labels, however, do not quite capture the tension that pulls at his existence. ‘I feel like I belong everywhere,’ he says to me, ‘and also nowhere at all. I am just there, floating in the middle of everywhere.’

This, of course, is not necessarily a bad thing, and I get the feeling that Eli does not mean it as such. Every country, every clan, every culture takes pride in their traditions. They derive much pleasure from those characteristics that make them distinctly them. Part of Eli’s project is to memorialise this distinction. His patterns are designed to illustrate the poly-variegated narratives that distinguish Africa’s nations and tribes. In doing so, he hopes to set the record straight on popular misconceptions, let the story unfold directly from the lion’s mouth, so to speak—well, more aptly put, from the fabric’s roaring prints. To this end, Eli is a Pan-Africanist. All the continent is his backyard to play in; yet, in the same breath, none of it is as well.

At the age of three, Eli left Rwanda and travelled for a decade. The journey spanned eight countries: Congo, Burundi, Uganda, Kenya, Tanzania, Malawi, Mozambique, then finally South Africa where he settled at age thirteen. He covered a lot of ground during those years. ‘Every country offered something different,’ he recalls. ‘I would say that Tanzania was one of the most welcoming places. It was easy to blend in, I don’t know why. People just overlooked our status.’ As for the rest, they offered an altogether different type of reception: us vs them. Eli believes this was so because people mostly fear what they do not know. Wherever a migrant lands, the locals are either fascinated or frightened by this creature who has come to stay from a far-off state.

It is a bizarre contradiction, the myth of difference we fabricate in order to create distance between our kin and those who closely resemble but do not live like us. We may tolerate these so-called aliens as long as they dance to our village tune. But, as soon as they give honest expression to their origins, we are quick to ostracise them. For Eli, this has created a double bind: ‘Where you are, you are not accepted. Where you are from, you are not accepted. So you just end up being tugged in the middle.’

Nevertheless, there is still good in the identity of a migrant. Even if she or he is in a place not historically their home, the immigrant label does not have to overshadow who they are. And although people may perceive them as a threat, the reality is that these individuals have carried so much with them on their backs. They have arrived with a wealth of skills to offer their new neighbours. By showcasing these treasures (which often go overlooked), they can remove the blinders that keep the local population from properly appreciating them. At least, this is what Eli is working to achieve with his gifts.

He goes on to point out that, in different ages and in different places, migrants were not necessarily seen as a social ill. Some of our ancestors were in the habit of welcoming foreign travellers into their midst, generously showing hospitality to the wayfarers who passed by their villages. To those who understood the dangers of the road, there was a respect for the treks these strangers had embarked on. It may not have been everyone but ‘it existed before our times, and it will exist after our times,’ Eli asserts. ‘So we just need to find a way to all see each other as human beings and not merely as a status.’ In his eyes, this is how we should approach migration.

Surprisingly, fashion seems to be a perfect fit for this task. Well-cut outfits are innately suited to give dignity to the victims of indignity. What is more, it goes without saying that dressing up is a popular way to express personality. And conscientious couture certainly has the ability to highlight the uniqueness of a person who has been dehumanised by xenophobic prejudice. Plus, when cross-pollination occurs – and not its toxic cousin, cultural appropriation – a runway is prepared for the creation of collections which have the potential to transcend the fads of the hour.

If these, then, are the glories that resplend in the cloth of cultural exchange, mayhaps migration does not get the credit it deserves. When all is said and done, the fabric of the world certainly is richer for the narratives designers like Eli are threading into their clothes.

Kambani Ramano
Storyteller at kR story studio
Of Nsenga and Venda descent, Kambani Ramano is a storyteller in pursuit of light. He writes. He photographs. He attempts to think meaningful thoughts. And he dreams of one day being a real boy—I mean, a real artist when he grows up.